Plank on a Stability Ball

Sounds like some sort of torture doesn't it? lol

This past Friday I went into the gym and found my trainer's girlfriend setting up what looked like a circuit course. It turned out that she was trying to come-up with a training circuit course for her soccer team. She asked me if I wanted to give it a go and of course I jumped at the chance!

Turned out it was an awesome workout. Mostly because it introduced me to some new exercises that challenged me in a really good way. Probably my favourite was the plank on a stability ball. I had, in the past, seen other people try it but thought it looked much too advanced for me. In fact I sort of suspected that if I were to try it I might end up in a heap on the floor (after rolling off the ball of course) or worse - wiggling uncontrollably on that thing!

Lo and behold it turned out brilliantly and it was a great variation on my usual ab-workout. Follow this link for a how-to and plank your way to flatter abs!

NOTE: Picture borrowed from http://health.howstuffworks.com
Posted by A Toronto girl out West at 9:41 PM No comments: 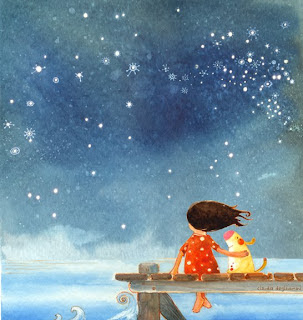 I'm on vacation this week so this blog will be silent until next Tuesday.
The next couple of months will likely be stressful but for now I'm out here in a beautiful mountain valley. With the boy. Enjoying every minute of my R&R.
See you next week!
NOTE: This picture is courtesty of El Beso - illustration by Claudia Degliuomini 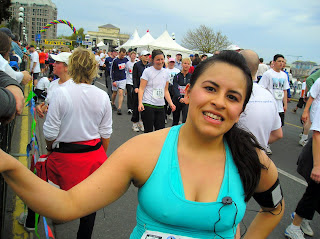 My post-race injuries have had time to heal.......I no longer hobble and my knee is now capable of not only bending but also unbending itself without any pain!! And so it seems that it's time to write my VERY first race report!

I bet you didn't know I was going to run a race? Well neither did I! No joke - I literally decided to sign up the weekend before the race. My main motivation, besides completing my first race, was the fact that I want to train to complete the Royal Victoria Marathon (RVM) this fall (I intend to run the half). I figured the 10k would be a good way to put the fear of God into me and teach me a lesson about training for a race. And so it was that in the week before the race I ramped up my mileage back up to 10k (I had previously been running that distance). I also managed to injure my knee in those days leading up to race day (April 27th, 2008). So much so that on the Friday before the Sunday race I could barely walk.

I had a moment when I considered not running the race - I wrote my trainer and told him so. He told me I'd been promising him a race for years and it was too late to turn back (sing it with me - Past the point of no return.....) and that he would see me at the finish line! And that was the extra motivation I needed.

The night before race day I was severely nervous - a giddy kind of nervous but nervous nonetheless. But as the boy reminded me - the worst that could happen was that I had to walk the race because of my injury. Either way I would be okay.

On race day I woke up to discover that my stomach was doing a number on me. I honestly have never gone to the washroom so many times in my life!!! In fact when we arrived at the starting area I needed to go.......again! So I found myself a porta potty with a relatively short line. Appearances were deceiving though because people were taking forever. Honestly the boys should have just been made to go in the bushes. With about 2 minutes to go before the start (the wheelchairs had already begun by this point) I finally got in and found myself in THE most unstable toilet ever. Whomever set it up actually put it on an uneven little slope. So when I went to get out it started rocking violently back and forth. Seriously, I was filled with fear that the thing would tip over with me in it and instead of running I would be trying to get out from underneath....ummm.....stuff. Ewww! I narrowly avoided the fate just in time to kiss the boy goodbye, hand him my warm up jacket, and attempt to join the hordes behind the starting line. Except I found myself behind the gates!! I had to jump, retrace my steps to make sure my timing chip passed the start line, and before I knew it........I was off!!!

My goal wasn't to run the most spectacular race. I wanted to run it in 1:15 and run it without stopping - not even for my knee.

Pretty soon I found myself at km2 and realized that I was running at a faster pace than I usually do in the gym. Clearly, there's something to be said for the whole lemming mentality in a race. Happily I also discovered that nothing hurt (yet).

I relished the race - in particular I took extreme delight in being able to grab water at the water stations, chugging back the water, and then throwing the paper cup on the curb. Hahahha! I don't thing I've ever felt more like an athlete in my life! :oP

At one point I found myself running a km near the seaside route where I took my first hesitant trots more than two years ago. Back then that km seemed to last an eternity. In fact I remember the first time I ran it and how it hurt and how badly I wanted to stop. But there was an older gentleman who yelled out "Keep running little girl!" lol And there I was two years later running that much and so much more! From that point in I felt like gold, I made a point of taking off my headphones to enjoy the bands playing on the sides, I waived at the spectators, and I took in the view of the Olympic Mountains from the race course.

Next thing I knew I was on km8. And that's when my left knee and left ankle really began to throb. In fact I got caught in a crush at the water station and stopped for a nano second only to realize that it hurt and I had to keep going or I would feel it. With about a km left to go I spotted my trainer off to the side and yelled hello to him. His girlfriend was there too and they were both so excited to see me there - proud of me too! His girlfriend even ran with me for a little bit on that last kilometre and pulled away to let me make the final dash on my own.

And dash I did!!! In fact I actually managed to sprint across the finish line!! :o) I distinctly remember during the race when Kanye West sang the line "This is history in the making...." And that's how I felt at the finish line. I made my own little history and I was proud. Oh I was more than proud - I was on a ridiculous high!!! In fact it took about a week to wear off. Now I can't wait for the next race. That feeling is definitely addictive!

I can't wait until the next time..........I really can't! I look so happy in that finish line picture above and I want to re-live that feeling. Honestly, I was amazed at what my body could do!
Posted by A Toronto girl out West at 10:37 PM 1 comment: