Doing it up - POSH style!

Recently, I had the opportunity to try a whole new restaurant in Victoria. It happened after a particularly grueling workout session. I was majorly in need of food as fuel and the Fiance was just plain hungry. On my trainer's recommendation we decided to head to a restaurant that opened up just next door to my gym. 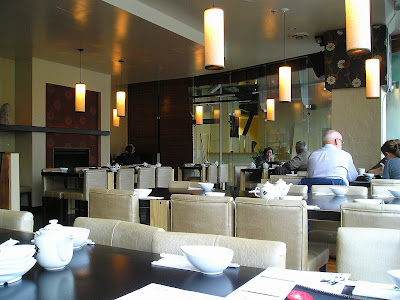 The whole schtick of the restaurant was that you cooked your own food in what is normally referred to as a shabu shabu or hotpot style. The upside of this is that you have total control over your food and you cook it in a very low fat way. Which is probably why my trainer recommended I give it a try!

This place bills itself as North America's first exclusive Japanese Sukiyaki restaurant. I'm not so sure that's accurate but the experience at POSH was overwhelmingly positive nonetheless. 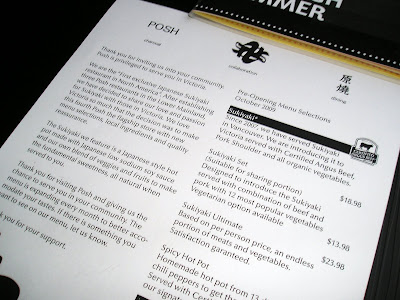 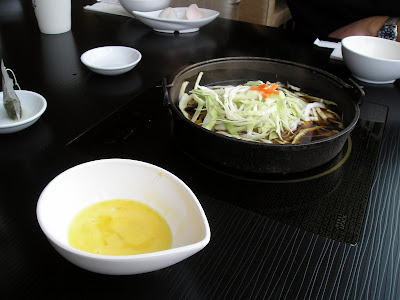 For our meal, we decided to try what essentially amounted to the restaurant's sampler plate. Once we made our choice the waitress brought over a large shallow pot and placed it on top of a burner built in to the table. In the pot she placed a mixture of water, sukiyaki sauce, and cabbage. The idea with the cabbage is that it will cook down releasing more water.

The egg is very traditional. The Japanese think that the texture and flavour of your cooked food will be further enhanced if just before eating it you run it through pasturized raw eggs. I tried it and I can see what they're talking about. Still I wouldn't recommend noshing on raw eggs unless you really trust the restaurant where you are eating. 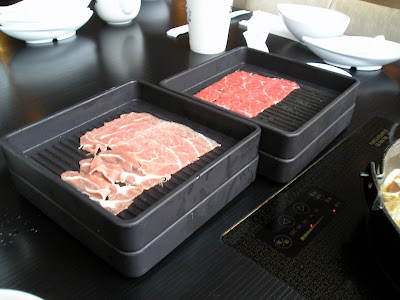 The meat for the dish comes in the form of several trays of finely sliced beef and pork belly. I left the meat to the Fiance and ate the veggies and tofu instead. 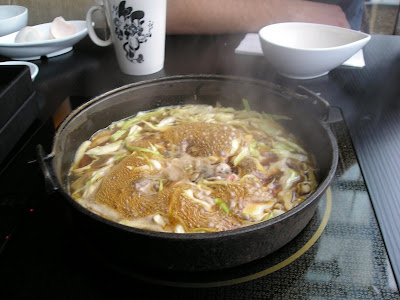 This is the sukiyaki pot doing its thing. At this point we had a couple of pieces of meat in there. 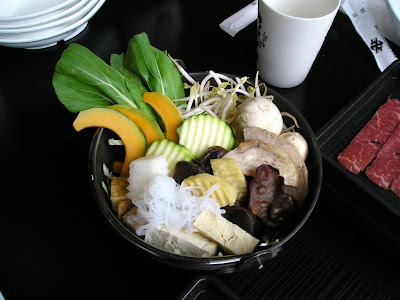 And this is the veggie selection. It was seriously impressive!!!! In that bowl there is more cabbage, bean sprouts, greens, melon, zuchinni, mushrooms of multiple varieties, ditto for tofu, some noodles, and also a very starchy root - I believe the waitress said it was taro. 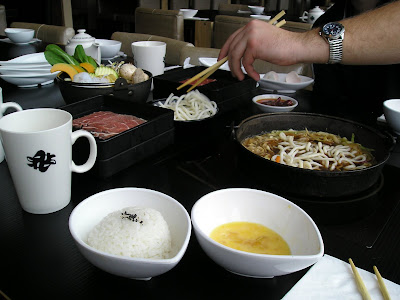 I chose to supplement my meal with a small bowl of delicate rice. The Fiance, as always, chose noodles instead.

Once we had all our ingredients (it took a while to gather everything) we got to the cooking process. To be honest it was pretty fun and I could totally see how this would be a great place to visit with friends. It really is fantastic for a social outing. Having said that I really do think you need a long time to enjoy the meal. Particularly if you're someone with a big appettite! We spent over an hour there and when we left the Fiance was still hungry!

In spite of the slow cooking process I still loved the experience. Plus the quality of the ingredients were superb!!! I would totally hit this place up again on a future visit. :o)

Have you ever tried a Hot Pot or Shabu Shabu type restaurant? Did you like it?

Have you ever tried taro root? I have to say it was the revelation of the meal for me!!!

Oh wow that sounds like a really cool experience! Sort of reminds me of fondu places, with the pot in the middle and how you just cook everything. I love those experiences because it takes time and no one is rushing you. It gives you a chance to chillz with the loves and take it slow. :D

I know there are other restaurants that offer shabu shabu dining in Vancouver for sure, but I guess maybe they don't offer it exclusively? Seems like an odd claim to make, but whatever. I don't think that place was around when I was still living in Vic. Too bad, cuz I would have loved to check it out.

Hey I've been to POSH! It is excellent. I left there being EXTREMELY overfull! I loved the veggie selection. So good.

Yup - it is kind of like a fondue place. Perfect for a social occasion!

I had no idea it was that new! It's right were MedGrill used to be.

Maybe you could check out one of the Lower Mainland locations - one in Richmond and one in Burnaby (by Metrotown I think)!

Isn't it though!?!? I was beyond impressed with the veggies!!! Honestly I didn't expect them to be anywhere near that good! :o)

i'd love to check out posh when in Vic. those veggies look delish! i've recently started cycling again so i'm seriously cutting out excessive sugars/starches that promote fatigue. i'm going to see if i might be able to find a similar establishment locally. thx

That looks awesome! We have a great Japanese/Korean restaurant near us that we go to frequently but have never tried something like this...will have to now.