Time to check in with "Operation Eat to the Back of the Pantry." By way of recap, this week I'm challeging myself to eat from what I already have in my home rather than jumping in the car and stocking up at the grocery store.

Before I share my thoughts thus far let's catch up with the eats! 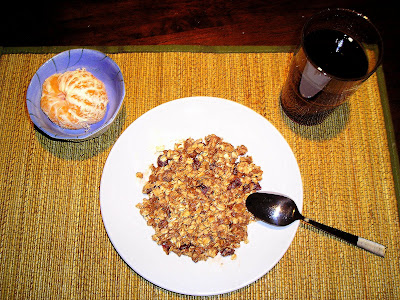 I started my Monday off with a Fitnessista breakfast cookie. Of course these things are all the rage in the blog world but it wasn't until I ate one that I understood why! They're super easy to make (you mix the ingredients the night before). There's no cooking involved. And due to the addition of nut butter and protein powder they keep you full all morning long. Go figure!

I teamed my cookie with a tangerine and some diluted POM juice. 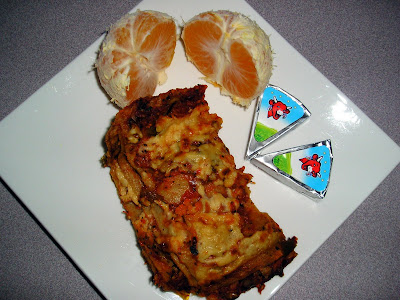 I looked high and low in my freezer and discovered a tray of roasted veggie lasagna. I had a piece of it and teamed it up with another tangerine and two pieces of laughing cow cheese. BTW is it obvious I don't have many fruits in the joint!? lol

By dinner I was starting to feel an urge to run to the grocery store. Instead I fought it and turned to an old and reliable friend: 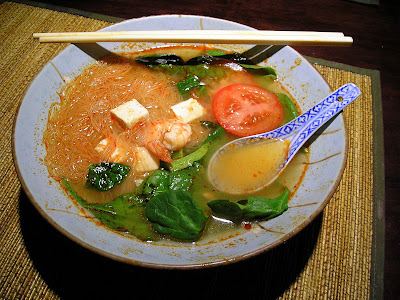 I have to confess I eat this ALL the time!!! I cook myself up some hot & sour broth and add some noodles (usually brown rice noodles), shrimp, often tofu, and loads of veggies. It's seriously YUM!!!

Now this morning I woke up and didn't feel like eating. Yup - just wasn't into it. At all. I had to basically force feed myself my one egg and two egg whites, and home made protein bar. 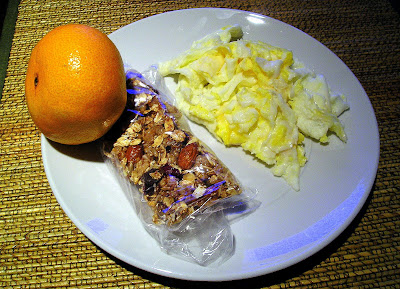 I know I took a picture of another tangerine but I didn't end up eating it at all. What can I say? There was only so much food I could take this morning. Kind of surprising given that I never have appettite problems. Still, I thought I better eat up or I'd regret it later.

For lunch I looked in my pantry and decided to get a little creative: 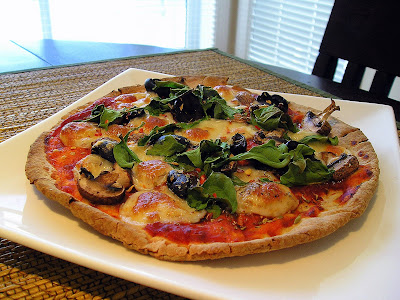 I took a WW pita (it looks bigger in the pic than it really is), added some pizza sauce, garlic, oregano, spinach, olives, cheese, and reduced fat cheese. I threw my "pizza" in the oven to get all happy and then I indulged. Also seriously YUM!!!

Problem is I was low in protein. Which meant I was starving by the time I got home in the afternoon. I may or may not have had a couple of home made granola bars. MAJOR FAIL. I know - what was I thinking!?!? Really, I was just so hungry I ate whatever I could get my grubby little hands on. At least I know my snacking was healthy. :o(

For dinner I ended up having the same pizza. It was really yummy - lack of protein notwithstading!

Reflections on Eat to the Back of the Pantry

Thus far I have to say I'm finding this to be a challenge. Mostly because it would be easy to eat pure carbs out of the pantry but I don't want to do that.

I also find myself seriously missing my fruits and veggies. I don't have much of either left. And right now I'm craving a huge fruit salad like whoah! lol

Thankfully I won't have to carry this on until the weekend. Nope - I'm not trying to cheat! It's just that it turns out I'm heading on a business trip from Thursday morning to Friday late at night. Which means I basically have 1 1/2 days left in the challenge. Eeek! Wish me luck peeps!!!

REMEMBER: Keep the comments coming - for the next two weeks I will donate a can of food for every comment you make! Yaaay Cans 4 Comments! :o)

Ahh! That soup looks so yummy! Reminds me of this really delicious Tofu soup from my favorite Korean restaurant.

Love the idea of Operation Eat to the Back of the Pantry. Good luck with the next few days. =]

I wouldn't really call buying fresh fruit/veg cheating - that stuff goes bad if you don't eat it up right away! Just the canned/packaged/frozen/boxed stuff should could...at least in my world, that's how it would go. LOL.