The Trio Heads to the Island

Hope you're having a wonderful day. As for me - not so much. The fevers seem to have largely subsided but I've been left with a hacking cough that cuts like a knife. So. Not. Cute.

In fact I'm feeling so yucky I'm inclined to stay home from work tomorrow. That would mean that I took a whole six days off for vacation and then didn't show up the rest of the week 'cause I was sick. Not really the way I like to roll but what is a girl to do. The way I figure it I'm highly contagious and it would do no one any good for me to go around spreading the wealth. Maybe I'll get the Fiance to go in and get my files so I can work in the confines of my home during the weekend.

Anywho - since I'm brutally sick and pretty well bed-ridden I thought I would take some time to blog about my recent trip to Vancouver Island. When we last left off we had barely squeaked by the U.S.A.-Canada border and ended up in a hotel in Washington State.

Our plan was to take the Anacortes Ferry from Anacortes Washington to Sidney, Vancouver Island. This is by no means the short way back to Van Isle but it is very scenic! You see the ferry winds its way through the beautiful San Juan Islands before ending up in Canada. As an added bonus you avoid the hassle of the potentially long land border crossing south of Vancouver.

I had never gone this particular way so I was kind of excited!!! Mind you I was worried that they wouldn't let us bring Daisy on board. Turns out I had no reason to fret - they took one look at her cuddly little face and decided to make an exception. lol 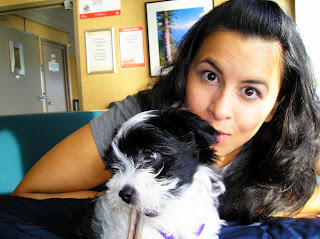 Daisy spent most of her voyage lying on the Fiance's jacket and chewing on her bully stick (a dehydrated bull penis - which apparently puppies love).

Meanwhile the Fiance and I enjoyed the sights of the San Juan Islands. I have to say I was quite impressed. They looked completely adorable and likely a perfect place for a Country Inn or B&B Getaway!!! 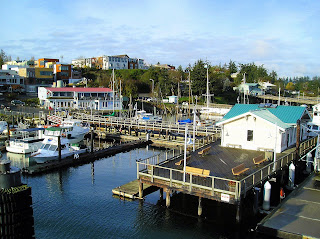 In fact I think once we move back to the Coast ('cause let's face it - I miss it something fierce) we'll have to take a trip to the San Juan Islands. For no reason at all except to relax in their absolutely beautiful surroundings! :o) 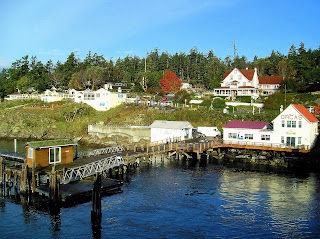 Now I have to confess the closer we got to Vancouver Island the more excited I became!!! It had been over a year since I'd been to the Island or even seen the familiar Coastal sights of quaint fishing villages, summer homes on beautiful islands, or even smelled the salty sea air. I was one happy camper on this ferry voyage. It was absolute perfection. 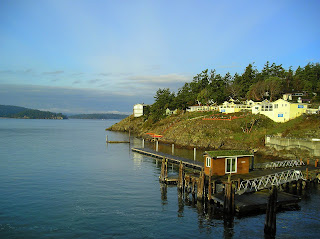 Call me a geek but once my iPhone picked up the Canadian signal I knew we were right around the corner! lol Sad. I know. But I am a blogger after all! :oP

Thankfully the process of getting back into Canada was super easy. Not like getting into the U.S.A. the last go around. Once we were back on the Island all three of us were delighted. The Fiance was back on the little slice of Canada where he was born and bred. I was back in the city that has always been so good for my soul. And Daisy . . . well I don't think she could believe that the grass was green or that the air was relatively warm. When we first got her, several days before leaving for Victoria, she'd never even had a collar on. You can imagine that this resulted in a bit of a comedy of errors when we first tried taking her for a walk.

But in Victoria, surrounded by the warm air, the beautiful sights, and the sounds of the Ocean Daisy found her walking legs:

See you soon bloggies!!
Posted by A Toronto girl out West at 11:13 AM

i could be obsessed with your dog. Just saying! She's SO cute :)

lol You're not the only one. We can't take her anywhere without groups gathering. It's actually kind of hilarious!

Ohmigosg, Daisy is TOO cute!!! I want one!

Love the photos & recap of your trip. It makes me want to go out west!

Your doggy is so cute! Love all the pictures :)

She is a bichon crossed with a shihtzu. So far she's fantastic and I would recommend the cross to anyone!!!

lol Thanks! She tries!! 

I've never taken the ferry through the San Juan Islands, but it looks beautiful :)